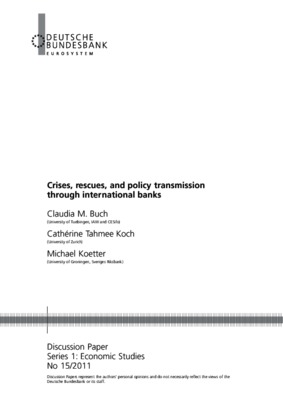 The World Financial Crisis has shaken the fundamentals of international banking and triggered a downward spiral of asset prices. To prevent a further meltdown of markets, governments have intervened massively through rescues measures aimed at recapitalizing banks and through liquidity support. We use a detailed, banklevel dataset for German banks to analyze how the lending and borrowing of their foreign affiliates has responded to domestic (German) and to US crisis support schemes. We analyze how these policy interventions have spilled over into foreign markets. We identify loan supply shocks by exploiting that not all banks have received policy support and that the timing of receiving support measures has differed across banks. We find that banks covered by rescue measures of the German government have increased their foreign activities after these policy interventions, but they have not expanded relative to banks not receiving support. Banks claiming liquidity support under the Term Auction Facility (TAF) program have withdrawn from foreign markets outside the US, but they have expanded relative to affiliates of other German banks. --Cross-border banking,financial crisis,government support,Term Auction Facility