Strengthening civil society from the outside? Donor driven consultation and participation processes in Poverty Reduction Strategies (PRSP): the Bolivian case

In the mid-1990s, an initiative was launched to provide special debt relief from public creditors to more than forty Highly Indebted Poor Countries (HIPCs). In 1999, this initiative was further refined and widened in what has been hailed as a new approach to development co-operation. The indebted country is to produce a Poverty Reduction Strategy Paper (PRSP), which will make clear how it will pursue the twin goals of sustainable growth and combating poverty. This is meant to provide guarantees to creditors that the budgetary resources freed by debt relief will be used tot combat poverty1. Interestingly, the conditions attached by the donor community for granting debt relief emphasize full country ‘ownership’, by which is meant that the PRSP process must be country-led and the result fully backed by the government, in contrast to some of the structural adjustment programs which where written by economists from the IMF and the World Bank and signed without conviction by the recipient government. A related feature is that the PRSP must be produced in an open and participatory2 manner. More specifically, civil society should be consulted and be involved in preparing the PRSP. The international donor community has eagerly espoused the thesis that civil society organizations (CSOs) can play an important role in democracy and development. There is now considerable funding for projects to strengthen CSOs in developing countries (Howell & Pearce 2000: 75). The Poverty Reduction Strategy goes one step further by insisting that organized civil society be acknowledged as a partner by government. This makes it the most important effort to date, to apply participatory approaches at the macro level (Tikare et al. 2001:3). 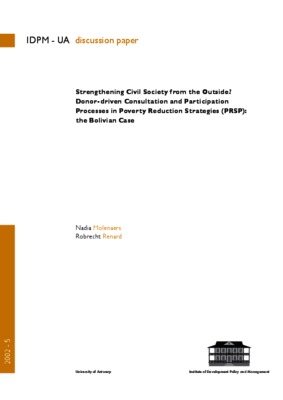