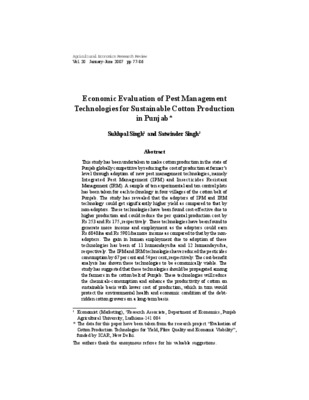 By Sukhpal Singh and Satwinder Singh
Get PDF (108 KB)

This study has been undertaken to make cotton production in the state of Punjab globally competitive by reducing the cost of production at farmer’s level through adoption of new pest management technologies, namely Integrated Pest Management (IPM) and Insecticides Resistant Management (IRM). A sample of ten experimental and ten control plots has been taken for each technology in four villages of the cotton belt of Punjab. The study has revealed that the adopters of IPM and IRM technology could get significantly higher yield as compared to that by non-adopters. These technologies have been found cost-effective due to higher production and could reduce the per quintal production cost by Rs 253 and Rs 175, respectively. These technologies have been found to generate more income and employment as the adopters could earn Rs 6840/ha and Rs 5901/ha more income as compared to that by the nonadopters. The gain in human employment due to adoption of these technologies has been of 11 humandays/ha and 12 humandays/ha, respectively. The IPM and IRM technologies have reduced the pesticides consumption by 67 per cent and 54 per cent, respectively. The cost-benefit analysis has shown these technologies to be economically viable. The study has suggested that these technologies should be propagated among the farmers in the cotton belt of Punjab. These technologies will reduce the chemicals-consumption and enhance the productivity of cotton on sustainable basis with lower cost of production, which in turn would protect the environmental health and economic condition of the debtridden cotton growers on a long-term basis.Crop Production/Industries,