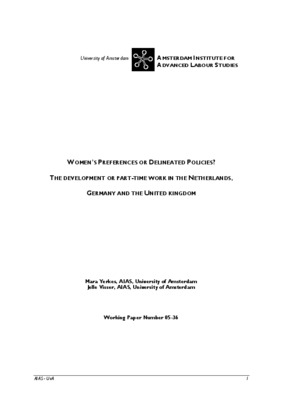 WP 36 - Women's Preferences or Delineated Policies? The development or part-time work in the Netherlands, Germany and the United Kingdom

By Mara Yerkes and Jelle Visser
Get PDF (316 KB)

Within sociological and economic analyses of working time, important questions remain regarding women’s ability to combine paid and domestic work. While there is a growing body of research in this area, our knowledge and understanding of the relationship between working, social and private time, often remains limited, in particular regarding the formation of preferences among women with different family statuses. In this paper, we consider the phenomenal growth of part-time work and the emergence of the one-and-a-half earner model in the Netherlands, comparing this to the growth and high levels of part-time work evident in Germany and the United Kingdom. Despite cross-national differences in the development of part-time work, many working mothers, in all three countries, exhibit a preference for part-time work as a second best option for combining paid work and motherhood. This led to a ‘normalisation’ of part-time work in the Netherlands. We show that despite a similar gendered employment pattern and a strong “breadwinner” welfare state tradition, part-time work in Germany and the UK developed under different conditions, making it more difficult to overcome “marginalisation.