Despite powerful advances in yield curve modeling in the last twenty years, comparatively little attention has been paid to the key practical problem of forecasting the yield curve. In this paper we do so. We use neither the no-arbitrage approach, which focuses on accurately fitting the cross section of interest rates at any given time but neglects time-series dynamics, nor the equilibrium approach, which focuses on time-series dynamics (primarily those of the instantaneous rate) but pays comparatively little attention to fitting the entire cross section at any given time and has been shown to forecast poorly. Instead, we use variations on the Nelson-Siegel exponential components framework to model the entire yield curve, period-by-period, as a three-dimensional parameter evolving dynamically. We show that the three time-varying parameters may be interpreted as factors corresponding to level, slope and curvature, and that they may be estimated with high efficiency. We propose and estimate autoregressive models for the factors, and we show that our models are consistent with a variety of stylized facts regarding the yield curve. We use our models to produce term-structure forecasts at both short and long horizons, with encouraging results. In particular, our forecasts appear much more accurate at long horizons than various standard benchmark forecasts.Term structure, yield curve, factor model, Nelson-Siegel curve 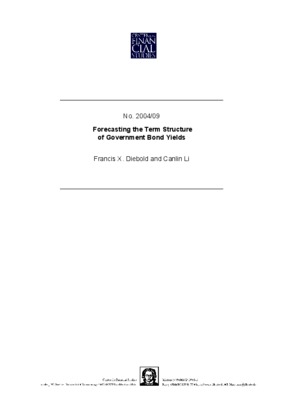