Rent seeking is well known, but empirical evidence of its effects is relatively rare. This paper analyzes the how domestic and international rent seeking caused Brazil to provide coffee export tax rebates that transferred foreign exchange to coffee importers. Although Brazil was the worlds largest exporter, it began to pay export tax rebates to selected coffee importers in 1965 and, by 1988, had paid rebates totaling $8 billion. Brazil explained these rebates as a mechanism to price discriminate among importers and expand exports within the context of the export quota imposed by the International Coffee Agreement. We show this explanation was invalid during most of the period. The net price fell for those who received rebates, causing Brazil to effectively transfer approximately $3 billion to foreign importers. The effects of the rebate policy were never recognized in Brazil, hidden largely by the complex nature of government intervention in the coffee sector.International Relations/Trade, 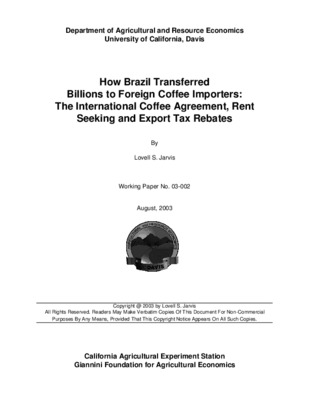