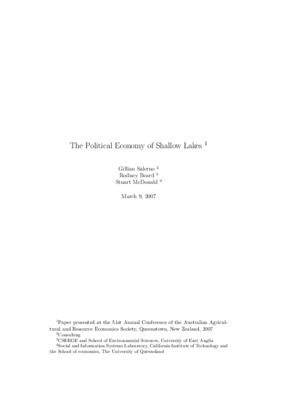 The political economy of shallow lakes

Shallow lakes display hysteresis in their response to phosphorous loading. Gradual increases in the nutrient content of the lake can appear to have little effect on the oligotrophic state of the lake until a point at which the lake suddenly flips to a eutrophic state. Ecotaxes on phosphorous loading have been suggested as means to maintain the lake in the socially desirable state - oligotrophic or not - when society can agree on a common welfare function. In this paper, we consider the case where society is divided into two interest groups and is thus unable to agree. In particular, the communities that share the use of the lake disagree on the relative importance of the shallow lake acting as a waste sink for phosphorous run-off as opposed to other ecosystem service. A dynamic game in which communities maximize their use of the lake results in a Nash equilibrium where the lake is in a eutrophic state when in fact the Pareto-optimum would be for the lake to be in an oligotrophic state. The tax that would induce, in a non-cooperative context, all of society's members to behave in such a way as to achieve a Pareto-optimal outcome is derived. Further, both types of communities lobby to have their preferred level of tax applied based on their relative preferences for a clean lake and phosphorous loading. The effects of the lobbying on the application of the optimal tax are investigated for particular values of relative preferences and the relative size of each group.Resource /Energy Economics and Policy,