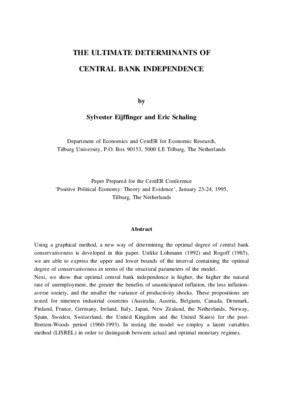 Using a graphical method, a new way of determining the optimal degree of central bank conservativeness is developed in this paper. Unlike Lohmann (1992) and Rogoff (1985), we are able to express the upper and lower bounds of the interval containing the optimal degree of conservativeness in terms of the structural parameters of the model. Next, we show that optimal central bank independence is higher, the higher the natural rate of unemployment, the greater the benefits of unanticipated inflation, the less inflation-averse society, and the smaller the variance of productivity shocks. These propositions are tested for nineteen industrial countries (Australia, Austria, Belgium, Canada, Denmark, Finland, France, Germany, Ireland, Italy, Japan, New Zealand, the Netherlands, Norway, Spain, Sweden, Switzerland, the United Kingdom and the United States) for the post-Bretton-Woods period (1960-1993). In testing the model we employ a latent variables method (LISREL) in order to distinguish between actual and optimal monetary regimes.Central Banks;Monetary Policy;monetary economics