The Andean Community's Price Band System (APBS), introduced in 1995, had the announced goal of reducing domestic price instability by buffering fluctuations in international prices through use of a variable import tariff. This paper evaluates the effects of the Andean Price Band System on domestic producer price variability, levels of nominal protection and changes in producer welfare. Application is made to four important food products - maize, rice, sugar and milk - in Colombia, Ecuador and Venezuela, from the period 1990 to 1998. The effects of the APBS on producer price variability are analyzed through 1) comparing coefficients of variation of detrended, monthly deseasonalized real prices before and after the harmonization of the APBS in 1995, and 2) variance decomposition of real domestic prices. For Colombia and Ecuador, the APBS is shown to have successfully reduced real price instability below levels of instability which existed prior to its introduction. Real exchange rate instability also decreased sharply in these two countries following introduction of the APBS. In Venezuela, real price instability is shown to have increased following introduction of the APBS, while real exchange rate instability was unchanged. The APBS' effects on producer price protection are examined through estimation of average nominal protection coefficients for the twelve country-commodity combinations identified above before and after the introduction of the APBS. Results show that in all three countries and four virtually all products, the APBS contributed to increased producer protection. Finally, this paper uses a variant of the Newbery-Stiglitz approach to calculate efficiency benefits due to risk reduction among producers and the transfer benefits created by redistributing income among producers, consumers and government. The results show that the risk reduction benefits created by the APBS are small. Similarly, the income transfer effects, though larger, are also low, and both contribute to generally low levels of estimated producer welfare effects. Overall, the paper concludes that the APBS has been of limited usefulness as a policy instrument designed to reduce producer price variability in an economically efficient manner.Andean Community, price band system, agricultural prices, price stabilization, Demand and Price Analysis, 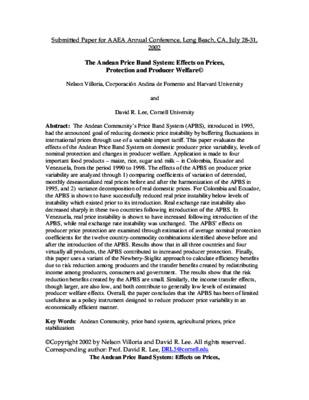