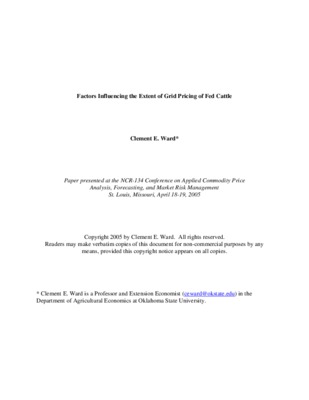 Factors Influencing the Extent of Grid Pricing of Fed Cattle

Motives for grid pricing of fed cattle have been identified in previous research. Also, estimates of grid pricing exist from feedlot surveys and data generated via mandatory price reports since 2001. However, no research has attempted to estimate factors influencing the extent of grid pricing by cattle feeders. Cattle feedlot respondents to a survey primarily in Nebraska, Colorado, Kansas, and Texas reported a wide range of grid pricing use in 2003. Two groups of feedlot respondents were created; those using grid pricing for half or less of their fed cattle marketings in 2003 and those using grid pricing for more than half of their marketings. Ordinary least squares and ordered logit models were estimated to determine factors affecting grid pricing use for the two comparison groups. For many potential factors influencing grid pricing, no significant differences were found between groups. The two most robust factors were the percent of fed cattle sold to the largest buyer and the percent of fed cattle marketed with some type of agreement, contract, or through an alliance or cooperative. Other significant factors related to market conditions and expected carcass performance of the cattle. However, results were neither consistent nor strong enough to explain the sharp drop in formula pricing fed cattle during the third year following implementation of mandatory price reporting.Livestock Production/Industries, Marketing,