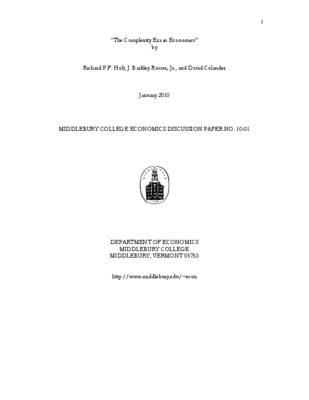 The Complexity Era in Economics

This article argues that the neoclassical era in economics has ended and is being replaced by a new era. What best characterizes the new era is its acceptance that the economy is complex, and thus that it might be called the complexity era. The complexity era has not arrived through a revolution. Instead, it has evolved out of the many strains of neoclassical work, along with work done by less orthodox mainstream and heterodox economists. It is only in its beginning stages. The article discusses the work that is forming the foundation of the complexity era, and how that work will likely change the way in which we understand economic phenomena and the economics profession.