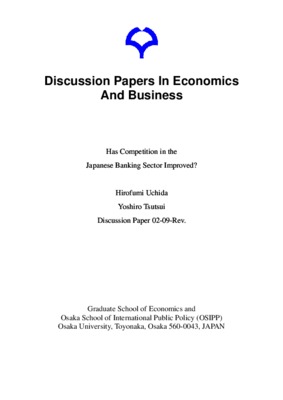 Has Competition in the Japanese Banking Sector Improved?

By Hirofumi Uchida and Yoshiro Tsutsui
Get PDF (199 KB)

This paper investigates whether competition in the Japanese banking sector has improved in the last quarter of the 20th century. By estimating the first order condition of profit maximization, together with the cost function and the inverse demand function, we found that competition had improved, especially in the 1970s and in the first half of the 1980s. The results fail to reject a Cournot oligopoly for city banks for most of the period, while they do reject it for regional banks for the overall period. This suggests that competition among city banks was stronger than that among regional banks.Japanese banks, degree of competition, loan market.