The impact of the sporting industry on economic decision making has increased dramatically since the global media explosion in the 1980s. Tourism and advertising revenues generated by these mega-events have become a major boost to the economies of hosting nations. In addition, globalisation has placed great emphasis on the importance of foreign direct investment (FDI), especially to developing countries. This paper seeks to examine the impact of the pre-event phase expenditure attributed to the hosting of the 2010 FIFA World Cup on the South African economy. In this phase, expenditure is mainly geared towards the construction and improvement of infrastructure required to successfully host the event. Using a Computable General Equilibrium (CGE) model developed specifically for the South African economy, the impact of the pre-event phase on the local economy is measured. It is found that there is a positive impact on most macroeconomic variables, including GDP and employment. With the potential economic benefits of the event and post-event phases of the World Cup also taken into account, it can be concluded with relative certainty that the impact of hosting a mega-event on the South African economy is beneficial towards achieving higher economic growth and development. In addition to analysing the impact of the 2010 FIFA World Cup, the outcomes are also used to briefly examine the feasibility of South Africa’s bid to host the 2011 IRB World Cup and the 2016 Olympic Games.computable general equilibrium, mega-events, economic development 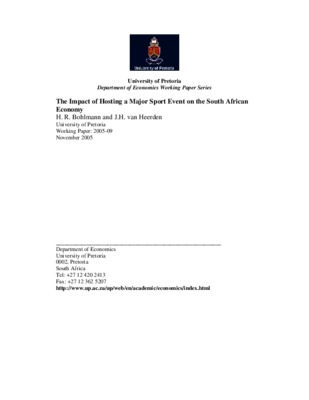