In this paper a contest game with heterogeneous players is analyzed in which heterogeneity could be the consequence of past discrimination. Based on the normative perception of the heterogeneity there are two policy options to tackle this heterogeneity: either it is ignored and the contestants are treated equally, or affirmative action is implemented which compensates discriminated players. The consequences of these two policy options are analyzed for a simple two-person contest game and it is shown that the frequently criticized trade-off between affirmative action and total effort does not exist: Instead, affirmative action fosters effort incentives. A generalization to the n-person case and to a case with a partially informed contest designer yields the same result if the participation level is similar under each policy.Asymmetric contest; affirmative action; discrimination 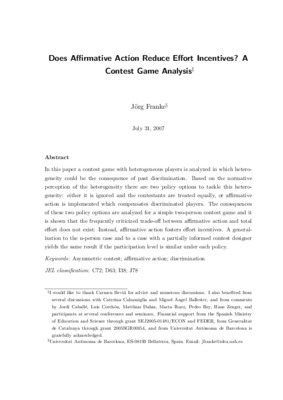