The article analyzes the causes of the incoherent reformprogram in Russia in the last decade. It argues that the slow and partial policies can be attributed to a viscous combination of lobbyism and constitutional design. Because the post-communist transitions after 1989 were non violent “velvet revolutions,” the old state monopolies were not removed. State monopolies have small-group advantages in contrast to the large group of private firms, which are numerous and not yet organized. It leads to an asymmetrical pattern of lobbyism in favor of non-transition, which can only be mitigated by establishing dispersed political institutions, that can raise the price on rent-seeking. In Russia the centralized political institutions of the past were not replaced. Hence, Russia inherited both interest groups and political institutions of the late communist era – an unfortunate starting point for carrying out comprehensive economic reforms. Free trade with the West and potential competition may put pressure on the old state monopolies. However, lobbies in the European Union may oppose free trade to maintain their monopoly. 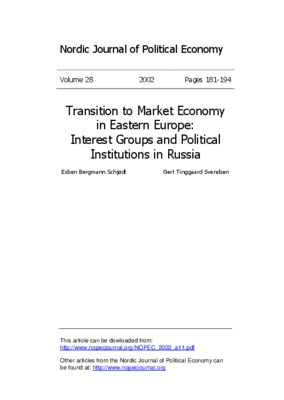