The Term Structure and the Expectations Hypothesis: a Threshold Model

The expectations hypothesis implies that rational investors can predict future changes in interest rates by simply observing the yield spread. According to Mishkin (1990) the expectations theory can also be reformulated in terms of the ability of the spread to predict future inflation. Unfortunately, although appealing, the theory has found little empirical support. Time-varying term premia and changing risk perception have been advocated to rationalize the aforementioned weak empirical evidence. In this work we suggest that the time-varying nature of term premia makes single-equation models inappropriate to analyse the informative content of the term structure. In particular, when the deviations between the expected and the actual spread are large, which occurs in times of soaring term premia volatility, linear models fail to support the expectations theory. Within a threshold model for term premia, we provide evidence that the yield spread contains valuable information to predict future interest rates changes once the risk-averse attitude of economic agents is appropriately considered. Empirical results show that the predictive ability of the yield spread is contingent on the level of uncertainty as captured by the size of monetary policy surprise.Expectations Hypothesis, Term Premia, Threshold Models. 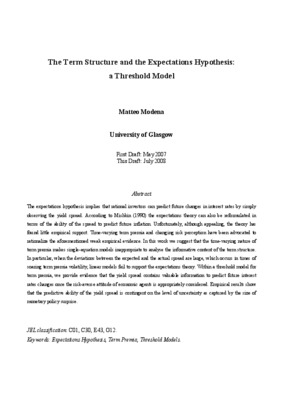