In this paper we argue that government spending played a significant role in stimulating the wave of innovation that hit the U.S. economy in the late 1970s and in the 1980s, as well as the simultaneous increase in inequality and in education attainment. Since the late 1970’s U.S. policy makers began targeting commercial innovations more directly and explicitly. We focus on the shift in the composition of public demand towards high-tech goods which, by increasing the market-size of innovative firms, functions as a de-facto innovation policy tool. We build a quality-ladder non- scale growth model with heterogeneous industries and endogenous supply of skills, and show that increases in the technological content of public spending stimulates R&D, raise the wage of skilled workers and, at the same time, stimulate human capital accumulation. A calibrated version of the model suggests that government policy explains between 12 and 15 percent of the observed increase in wage inequality in the period 1976-91.R&D-driven growth theory, heteregeneous industries, fiscal policy composition, innovation policy, wage inequality, educational choice. 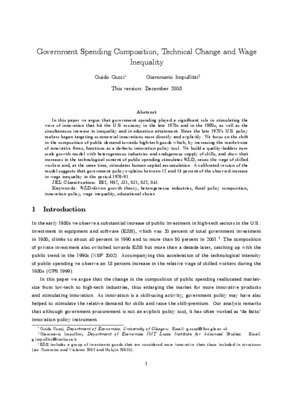