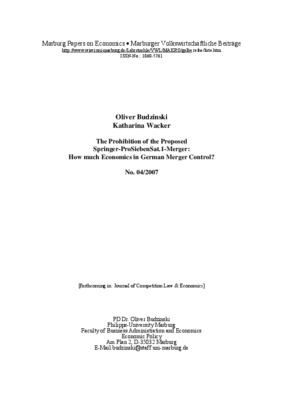 The Prohibition of the Proposed Springer-ProSiebenSat.1-Merger: How much Economics in German Merger Control?

By Oilver Budzinski and Katharina Wacker
Get PDF (188 KB)

We review the Bundeskartellamt (Federal Cartel Office Germany) decision on the proposed merger between Springer and ProSiebenSat.1 from an economic point of view. In doing so, it is not our goal to analyse whether the controversial decision by the Bundeskartellamt has been correct or flawed from a legal point of view. Instead, we analyse whether the economic reasoning in the decision document reflects state-of-the-art economic theory on conglomerate mergers. Regarding such types of mergers, anticompetitive effects either do not occur regularly or are more often than not overcompensated by efficiency gains, so that a standard welfare perspective demands reluctance concerning antitrust interventions. This is particularly true if two-sided markets, like media markets, are involved. However, anticompetitive conglomerate mergers are not impossible, in particular in neighbouring markets where there is some relationship between the products of the merging companies. In line with the more-economic approach in European merger control, a particular thorough line of argumentation, backed with particularly convincing economic evidence, is necessary to justify a prohibition of a conglomerate merger from an economic point of view. Against this background, we do not find the reasoning of the Bundeskartellamt entirely convincing and sufficiently strong to justify a prohibition of the proposed combination from an economic perspective. The reasons are that (i) the Bundeskartellamt fails to continuously consider consumer and customer welfare as the relevant standards, (ii) positive efficiency and welfare effects of cross-media strategies are neglected, (iii) in contrast, the competition agency sometimes appears to view profitability of post-merger strategy options to be per se anticompetitive (efficiency offence), (iv) the incontestability of the relevant markets is not sufficiently substantiated, (v) inconsistencies occur regarding the symmetry of the TV advertising market duopoly versus the unique role of the BILD-Zeitung and (vi) the employment of modern economic instruments appears to be underdeveloped. Thus, we conclude that the Bundeskartellamt has not embraced the European more-economic approach in the analysed decision. However, one can discuss whether economic effects are overcompensated in this case by concerns about a reduction in diversity of opinion and threats to free speech. Similar to the Bundeskartellamt, we do not consider these concerns in our analysis.merger control, media markets, more-economic approach, conglomerate mergers, cross-promotion