The Role of Direct Democracy in the European Union

In this paper, the introduction of direct-democratic decision-making in all EU decisions is considered when it is feasible without prohibitively increasing decision-making costs. We start with the contractarian argument that each constitution is a contract joining the citizens of a state and requires as such the explicit agreement of (a majority of) citizens. Thus, the future European Constitution as well as future changes of it should be decided by the European citizens. After a discussion of the pros and cons of direct democracy, the ability of direct democracy to help creating a European demos is discussed. Consequently, we propose a mandatory (required and binding) referendum on total and partial revisions of the European Constitution. In addition, we propose a constitutional initiative, a statutory and a general initiative as well as a fiscal referendum for financially important projects.Direct Democracy, Referenda, Initiatives. 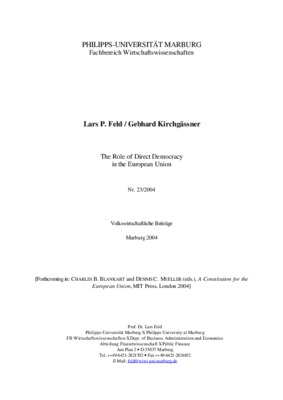