One of the most pertinent reform discussions in Germany is found in the debate on the local business tax. During the last year, two basic reform proposals, a ‚revitalisation‘ of the current local business tax and its replacement by a surcharge on personal and corporate income taxes, intensively competed. Finally, none of these alternatives was realised. The federal parliament and government could only agree to introduce temporary financial relieves for local jurisdictions. In this paper, the continuous need for a fundamental reform of local government finances is emphasised. After a discussion of the basic alternative reform models against the background of characteristics of economically reasonable local government finances, the simulated impact of a local surcharge on income taxes is compared to the tax rate differences at the local level in Switzerland. The surcharge model would lead to smaller tax rate differentials than currently exist at the Swiss local level. The resistance against such a reform is explained by the fact that political actors at the local level oppose the implied higher political responsibility when citizens face local income tax rates as prices for local public services. 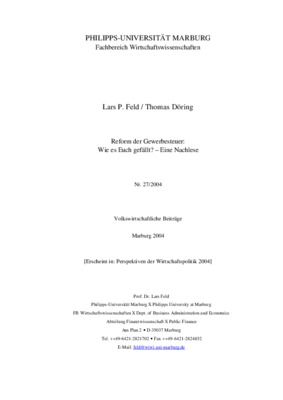