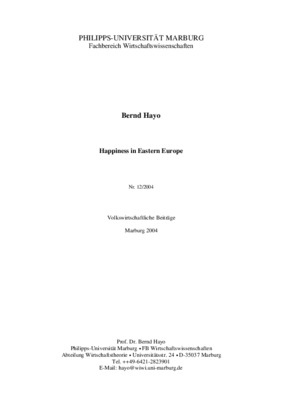 This paper analyses the determinants of happiness in seven Eastern European transition countries during the early phase of economic transition. The analysis of representative survey data in an ordered logit model shows that those core socio-demographic and economic variables known to be relevant from studies on the US and Western European countries have a similar impact on happiness in Eastern Europe. In addition, rural dwellers and church goers experience greater life-satisfaction. Aggregate unemployment can explain more of the crosscountry variation in happiness than income per capita.eastern europe, transition countries, economic transition, happiness, life-satisfaction, unemployment