This paper proposes a method for estimating the probability density of a variable of interest in the presence of model ambiguity. In the first step, each candidate parametric model is estimated minimizing the Kullback-Leibler "distance" (KLD) from a reference nonparametric density estimate. Given that the KLD represents a measure of uncertainty about the true structure, in the second step, its information content is used to rank and combine the estimated models. The paper shows that the resulting parameters estimator is root-n consistent and asymptotically normally distributed. The KLD between the nonparametric and the parametric density estimates is also shown to be asymptotically normally distributed. This result leads to determining the weights in the model combination, using the distribution function of a Normal centered on the average performance of all plausible models. As such, this combination technique does not require the true structure to belong to the set of competing models and is computationally simple. I apply the proposed method to estimate the density function of daily stock returns under different phases of the business cycle. The results indicate that the double Gamma distribution is more adequate than the Gaussian distribution in modeling stock returns, and that the combination outperforms each individual candidate model both in- and out-of-sampledensity forecasting, kullback-Leibler information, model combination 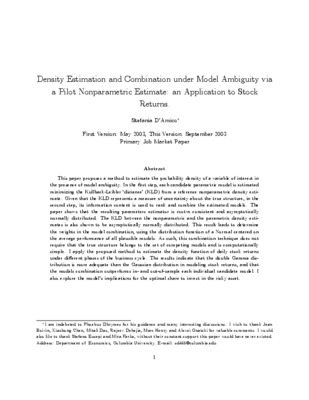