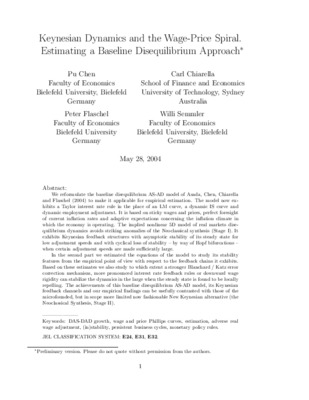 Keynesian Dynamics and the Wage-Price Spiral:Estimating a Baseline Disequilibrium Approach

We reformulate the baseline disequilibrium AS-AD model of Asada et al. (2004) to make it applicable for empirical estimation. The model now exhibits a Taylor interest rate rule in the place of an LM curve, a dynamic IS curve and dynamic employment adjustment. It is based on sticky wages and prices, perfect foresight of current inflation rates and adaptive expectations concerning the inflation climate in which the economy is operating. The implied nonlinear 5D model of real markets disequilibrium dynamics avoids anomalies of the Neoclassical synthesis (Stage I). It exhibits Keynesian feedback structures with asymptotic stability of its steady state for low adjustment speeds and with cyclical loss of stability when adjustment speeds are made sufficiently large. In the second part we estimated the equations of the model to study its stability features from the empirical point of view with respect to the feedback chains it exhibits. Based on these estimates we also study to which extent a Blanchard and Katz error correction mechanism, more pronounced interest rate feedback rules or downward wage rigidity can stabilize the dynamics in the large when the steady state is locally repelling. The achievements of this baseline disequilibrium AS-AD model and its Keynesian feedback channels can be usefully contrasted with those of the microfounded, but in scope more limited now fashionable New Keynesian alternative (the Neoclassical Synthesiso, Stage IIDAS-AD growth, wage and price Phillips curves,adverse real wage adjustment, (in)stability, persistent business cycles