A Review of Causes for and Consequences of Economic Concentration in the U.S. Meatpacking Industry

Clear and continuing changes in the structure of the U.S. meatpacking industry have significantly increased economic concentration since the mid-1970s. Concentration levels are among the highest of any industry in the United States, and well above levels generally considered to elicit non-competitive behavior and result in adverse economic performance, thereby triggering antitrust investigations and subsequent regulatory actions. Many agricultural economists and others deem this development paradoxical. While several civil antitrust lawsuits have been filed against the largest meatpacking firms, there have been no major antitrust decisions against those firms and there have been no significant federal government antitrust cases brought against the largest meatpacking firms over the period coincident with the period of major structural changes. The structural changes in the U.S. meatpacking industry raise a number of questions. What is the nature of the changes and what economic factors caused them? What evidence is there that economic behavior has shifted from competitive to non-competitive? What evidence is there that structural and behavioral changes have resulted in adverse economic performance? This paper reviews the available data and information pertaining to these questions and provides some insight into the answers. Structural changes are reviewed, along with discussion of one major causal factor for the changes. Then, numerous studies conducted over the past twenty years are reviewed, i.e., studies carried out at different times with alternative approaches and varying levels of data aggregation.Marketing, 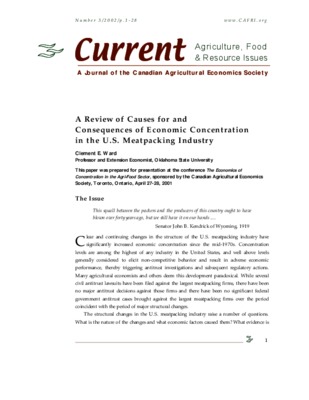