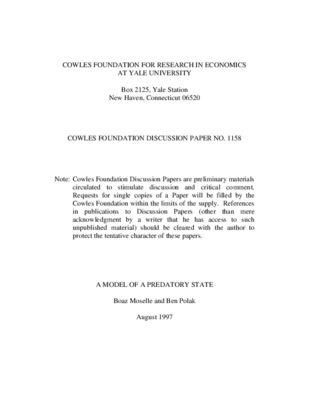 A Model of a Predatory State

By Boaz Moselle and Ben Polak
Get PDF (3 MB)

We provide a model of a primitive state whose rulers extort taxes for their own ends. This 'predatory' state can result in lower levels of both output and popular welfare than either organized banditry or anarchy. The predatory state may provide public goods, such as protection or irrigation, and hence may superficially resemble a contractual state. But, the ability to provide such goods can actually reduce popular welfare after allowing for tax changes. We compare the revenues raised by taxation with those from banditry to get an idea when primitive states are likely to emerge. We then consider interactions between bandits and the state. 'Corrupt' side-deals are bad for output and popular welfare, but good for revenue. Even in the absence of such collusion, the existence of a 'mafia' and of the state can be good for each other. Competition between organized crime and the state, however, typically reduces popular welfare and pushes the volume of banditry close to its anarchy level. Finally, we extend the basic model to allow the populace to form expectations of tax set by a long-lived king. Our relatively pessimistic conclusions about predatory states extend to this dynamic setting.