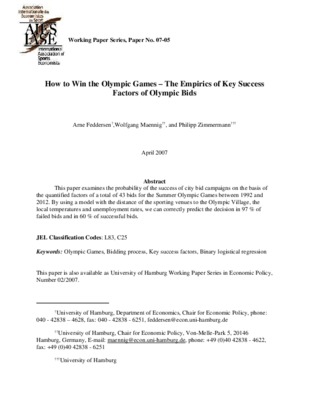 This paper examines the probability of the success of city bid campaigns on the basis of the quantified factors of a total of 43 bids for the Summer Olympic Games between 1992 and 2012. By using a model with the distance of the sporting venues to the Olympic Village, the local temperatures and unemployment rates, we can correctly predict the decision in 97 % of failed bids and in 60 % of successful bids.Olympic Games, Bidding process, Key success factors, Binary logistical regression