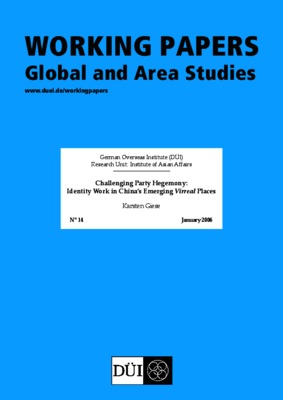 The Chinese Communist Party has chosen to base the legitimacy of its rule on its performance as leading national power. Since national identity is based on shared imaginations of and directly tied to territory – hence place, this paper analyses both heterodox models for identification on the national and potentially competing place-based collective identities on the local level. This analysis, based on communication within a number of popular communication forums and on observation of behavior in the physical reality of today’s urban China, shows that communication within the virtual and behavior in the real world are not separated realities but form a new virreal spatial continuum consisting of imagined places both online and offline. I argue that ties to place are stronger and identities constructed on shared imaginations of place are more salient the more direct the experience of place is – be the place real, virtual or virreal. Hence in China challenges to one-party rule will probably accrue from competing localized collective identities rather than from heterodox nationalism.to explore the variety and complexity of functional antagonisms in the social subsystems.China, Internet, political power, collective identity, nationalism, place, bulletin, board system, online communication, online community