Environment, Human Development and Economic Growth after Liberalisation: An Analysis of Indian States

Economic growth does not necessarily ensure environmental sustainability for a country. The relationship between the two is far more complicated for developing countries like India, given the dependence of a large section of the population on natural resources for livelihood. Under this backdrop, the current study attempts to analyze the relationships among Environmental Quality (EQ), Human Development (HD) and Economic Growth (EG) for 14 major Indian States during post liberalisation period (1991-2004). Further, for understanding the changes in EQ with the advancement of economic liberalisation, the analysis is carried out by dividing the sample period into two: Period A (1990–1996) and Period B (1997–2004). For both the sub-periods, 63 environmental indicators have been clustered under eight broad environmental groups and an overall index of EQ using the HDI methodology. The EQ ranks of the States exhibit variation over time, implying that environment has both spatial and temporal dimensions. Ranking of the States across different environmental criteria (groups) show that different States possess different strengths and weaknesses in managing various aspects of EQ. The HDI rankings of the States for the two periods are constructed by the HDI technique following the National Human Development Report 2001 methodology. We attempt to test for the Environmental Kuznets Curve hypothesis through multivariate OLS regression models, which indicate presence of non-linear relationship between several individual environmental groups and per capita net state domestic product (PCNSDP). The relationship between EQ and economic growth however does not become clear from the current study. The regression results involving individual environment groups and HDI score indicate a slanting N-shaped relationship. The paper concludes that individual States should adopt environmental management practices based on their local (at the most disaggregated level) environmental information. Moreover, since environmental sustainability and human well-being are complementary to each other, individual States should attempt to translate the economic growth to human well-being.Environmental Quality; Economic Liberalisation; Economic Growth; Human Development; India 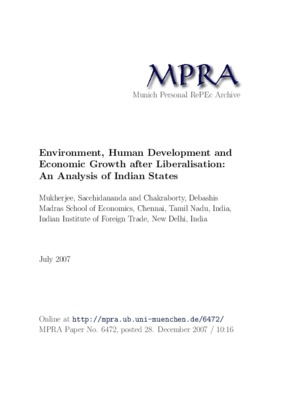