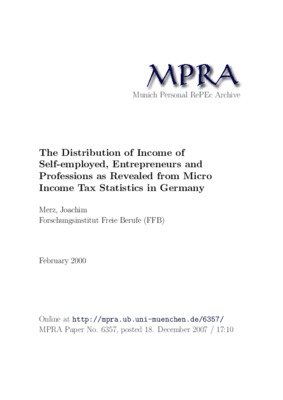 The Distribution of Income of Self-employed, Entrepreneurs and Professions as Revealed from Micro Income Tax Statistics in Germany

As simple as it is, results describing the world are heavily dependent on the quality of the underlying data. One of the very crucial variables in microanalytical analyses of well-being and human resources is income. The more, when the situation of the self-employed is regarded. This paper focus on the distribution of income based on very sound data: the German Income Tax Statistic (Einkommensteuerstatistik) 1992. New is the actual possibility to use for the first time such a sound microdatabase to analyze the self-employed in particular: a 100.000 microdata sample of the population wide German Income Tax Statistic. New is the comparison between income from dependent and self-employed work with emphasis on the entrepreneurs and professions, and new is the indepth decomposition inequality analysis of the aggregated groups and of the single professions based on an inequality generalized entropy decomposition approach. One overall striking result is: the occupational status as an employee, entrepreneur or as a profession with its connected low between inequality share is by far not the overall driving factor to ‘explain’ the overall income distribution and inequality picture of the re-unified Germany; it is the within group inequality which counts in particular.Income distribution of self-employed, entrepreneurs, professions, income tax statistics, microanalysis, decomposition of inequality