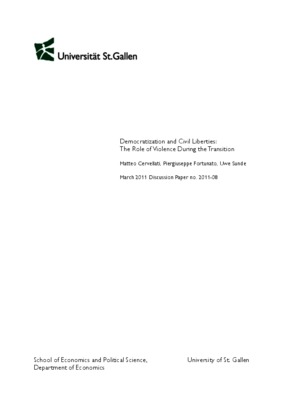 Democratization and Civil Liberties: The Role of Violence During the Transition

This paper investigates the role of violent civil conflicts during the process of democratization for the quality of emerging democracies, and in particular, the protection of civil (political and economic) liberties. A simple theory in which different groups may engage in violent conflict in order to become the ruler predicts a crucial role of the democratization scenario. A peaceful democratization leads to democracies with a high degree of civil liberties, reflecting a social contract according to which all groups are politically represented and the rulers deliberately abstain from wasteful rent extraction. A transition to democracy under a violent conflict is less likely to lead to a system with a high degree of civil liberties. Empirical evidence from the third wave of democratization based on a difference-indifference methodology supports the theoretical predictions. The findings suggest that violent conflicts during the democratic transition have persistent negative effects on the quality of the emerging democracies.