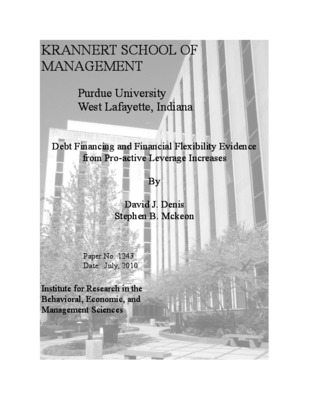 Firms that intentionally increase leverage through substantial debt issuances do so primarily as a response to operating needs rather than a desire to make a large equity payout. Subsequent debt reductions are neither rapid, nor the result of pro-active attempts to rebalance the firm’s capital structure towards a long-run target. Instead, the evolution of the firm’s leverage ratio depends primarily on whether or not the firm produces a financial surplus. In fact, firms that generate subsequent deficits tend to cover these deficits predominantly with more debt even though they exhibit leverage ratios that are well above estimated target levels. While many of our findings are difficult to reconcile with traditional capital structure models, they are broadly consistent with a capital structure theory in which financial flexibility, in the form of unused debt capacity, plays an important role in capital structure choices.