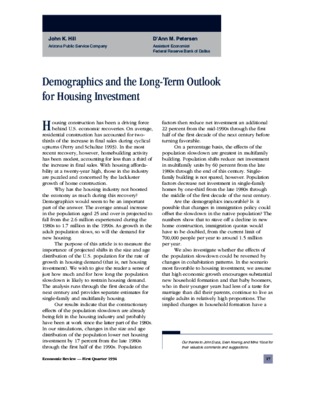 Demographics and the long-term outlook for housing investment

John Hill and D'Ann Petersen measure the importance of projected shifts in the size and age distribution of the U.S. population for domestic housing investment. Their analysis runs through the year 2010 and provides separate estimates for single-family and multifamily investment. ; Hill and Petersen find that the contractionary effects of the population slowdown are already being felt in the housing industry and probably have been since the latter part of the 1980s. In Hill and Petersen's simulations, demographic shifts lower net housing investment by 17 percent from the late 1980s through the first half of the 1990s. Population factors then reduce net investment an additional 22 percent through the year 2005 before turning favorable. ; Hill and Petersen discuss the implications of their findings for construction jobs and housing prices. They suggest that the population slowdown need not produce an absolute contraction in housing employment. It will, however, reduce housing's share of national employment by as much as one-third. According to the authors, the changing demographics do not provide a compelling reason for average home prices to suffer a deep decline. They do suggest, however, that significant relative price adjustments may need to take place between different types of homes.Demography ; Housing