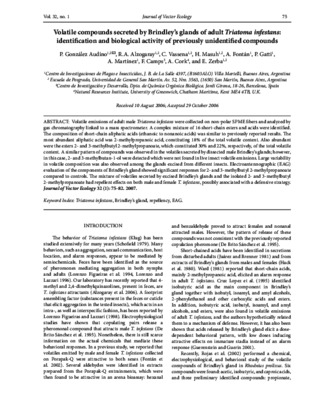 Volatile emissions of adult male Triatoma infestans were collected on non-polar SPME fibers and analyzed by gas chromatography linked to a mass spectrometer. A complex mixture of 16 short-chain esters and acids were identified. The composition of short-chain aliphatic acids (ethanoic to nonanoic acids) was similar to previously reported results. The most abundant aliphatic acid was 2-methylpropanoic acid, constituting 18% of the total volatile content. Also abundant were the esters 2- and 3-methylbutyl 2-methylpropanoate, which constituted 30% and 22%, respectively, of the total volatile content. A similar pattern of compounds was observed in the volatiles secreted by dissected male Brindley’s glands; however, in this case, 2- and 3-methylbutan-1-ol were detected which were not found in live insect volatile emissions. Large variability in volatile composition was also observed among the glands excised from different insects. Electroantennographic (EAG) evaluation of the components of Brindley’s gland showed significant responses for 2- and 3-methylbutyl 2-methylpropanoate compared to controls. The mixture of volatiles secreted by excised Brindley’s glands and the isolated 2- and 3-methylbutyl 2-methylpropanoate had repellent effects on both male and female T. infestans, possibly associated with a defensive strategy