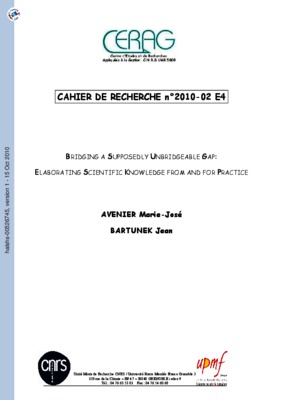 BRIDGING A SUPPOSEDLY UNBRIDGEABLE GAP: ELABORATING SCIENTIFIC KNOWLEDGE FROM AND FOR PRACTICE

This article aims at advancing the still on-going conversations about the so-called research/practice gap. Some academics argue that it is not possible to develop knowledge that is both academically valuable and helpful for practice, while others hold the opposite view, justifying it on the basis of works published in top tier journals. The paper argues that the main reason scholars hold such contradictory views on this topic central to management science is the lack of explicitness of a number of founding assumptions which underlie their discourses, in particular the lack of explicitness of the epistemological framework in which the parties' arguments are anchored. The paper presents methodological guidelines for elaborating scientific knowledge both from and for practice, and illustrates how to use these guidelines on examples from a published longitudinal research project. In order to avoid the lack of explicitness pitfall, the paper specifies scientific and epistemological frameworks in which the knowledge elaborated in this methodological approach, when properly justified, can be considered as legitimate scientific knowledge.collaborative research ; constructivist epistemological paradigm ; sciences of the artificial ; organizational design science; rigor; actionability