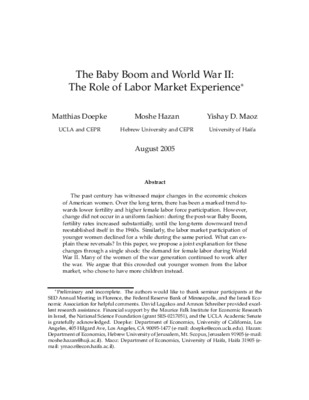 The Baby Boom and World War II: The Role of Labor Market Experience

The past century has witnessed major changes in the economic choices of American women. Over the long term, there has been a marked trend towards lower fertility and higher female labor force participation. However, change did not occur in a uniform fashion: during the post-war Baby Boom, fertility rates increased substantially, until the long-term downward trend reestablished itself in the 1960s. Similarly, the labor market participation of younger women declined for a while during the same period. What can explain these reversals? In this paper, we propose a joint explanation for these changes through a single shock: the demand for female labor during World War II. Many of the women of the war generation continued to work after the war. We argue that this crowded out younger women from the labor market, who chose to have more children instead.