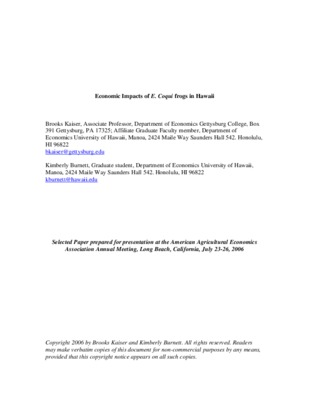 By Brooks A. Kaiser and Kimberly M. Burnett
Get PDF (104 KB)

Eleutherodactylus coqui, a small frog native to Puerto Rico, was introduced to Hawaii in the late 1980s, presumably as a hitchhiker on plant material from the Caribbean or Florida (Kraus et al. 1999). The severity of the frogs' songs on the island of Hawaii has lead to a hypothesis touted both in the scientific community and in the popular media that the presence of the frog on or near a property results in a decline in that property's value. The objective of this study is to explicitly test the extent to which this hypothesis is true, and if it is, what the level of localized damage incurred on a property's value is. The invasion began on either Hawaii or Maui, and has now expanded to Oahu and Kauai. Spread has occurred through the movement of nursery plants and through intentional introduction of the frogs to previously uninfested areas. The coqui frogs have attained some of the highest densities ever observed for terrestrial amphibian populations (up to 133,000 per ha on Hawaii). These extremely dense populations have lead to both economic and ecological concerns, especially on the island of Hawaii. The loud mating song of the male frogs is the most widely cited complaint in Hawaii. The frog's song has been measured to range in the 80-100 decibel level (Beard and Pitt 2005). Given that 45 decibels may be enough to prevent the average person from sleeping , the song of the coqui is considered a form of noise pollution in Hawaii. In this study we focus only on the direct damage costs of the coqui's loud mating songs through a hedonic pricing model. Because this only one component of the economic costs of noise pollution, it should be considered a lower bound estimate of the true cost of their noise and their presence. Since this lower bound is generated through measurable losses in property value, its use in invasive species policy should be welcomingly straightforward compared to survey methods or other efforts to quantify damages from ecosystem change. We find that coqui frogs do impose localized damages to real estate values, but by 800 meters distance from a complaint this damage is declining relative to the effect at 500m. The per-transaction reduction in value when frog complaints have been lodged within 500m appears to be about 0.16%, holding constant district, acreage, financial conditions, zoning, and neighborhood characteristics. This is just over 1/3 of the impact that an increase of 1% in mortgage rates is estimated to have on price.Land Economics/Use,