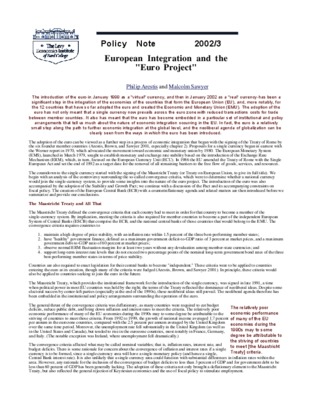 "European Integration and the 'Euro Project'"

By Philip Arestis and Malcolm Sawyer
Get PDF (61 KB)

The introduction of the euro has been a significant step in the integration of the economies of the countries that form the European Union (EU) and the 12 countries that comprise the Economic and Monetary Union (EMU). Its adoption not only means that a single currency prevails across the euro zone with reduced transactions costs for trade between member countries; the currency also has become embedded in a particular set of institutional and policy arrangements that tell us about the nature of economic integration in the EU. In fact, the euro is a relatively small step along the path to further economic integration at the global level, and the neoliberal agenda of globalization can be clearly seen from the ways in which the euro has been introduced.