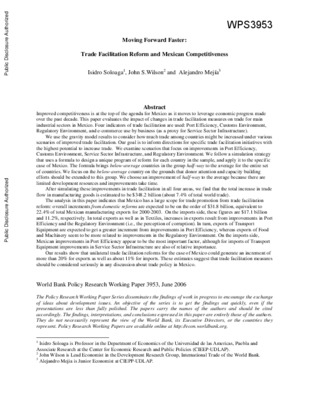 Improved competitiveness is at the top of the agenda for Mexico as it moves to leverage economic progress made over the past decade. The authors evaluate the impact of changes in trade facilitation measures on trade for main industrial sectors in Mexico. They use four indicators of trade facilitation: port efficiency, customs environment, regulatory environment, and e-commerce use by business (as a proxy for service sector infrastructure). The authors use gravity model results to consider how much trade among countries might be increased under various scenarios of improved trade facilitation. They follow a simulation strategy that uses a formula to design a unique program of reform for each country in the sample, and apply it to the case of Mexico. The formula brings the below-average countries in the group half-way to the average for the entire set of countries. After simulating these improvements in trade facilitation in all four areas, the authors find that the total increase in trade flow in manufacturing goods is estimated to be $348.2 billion (about 7.4 percent of total world trade). The analysis indicates that Mexico has a large scope for trade promotion from trade facilitation reform: overall increments from domestic reforms are expected to be on the order of $31.8 billion, equivalent to 22.4 percent of total Mexican manufacturing exports for 2000-03. On the imports side, these figures are $17.1 billion and 11.2 percent, respectively. In total exports as well as in textiles, increases in exports result from improvements in port efficiency and the regulatory environment (that is, the perception of corruption). In turn, exports of transport equipment are expected to get a greater increment from improvements in port efficiency, whereas exports of food and machinery seem to be more related to improvements in the regulatory environment. On the imports side, Mexican improvements in port efficiency appear to be the most important factor, although for imports of transport equipment improvements in service sector infrastructure are also of relative importance.Free Trade,Trade Policy,Economic Theory&Research,Common Carriers Industry,Transport and Trade Logistics