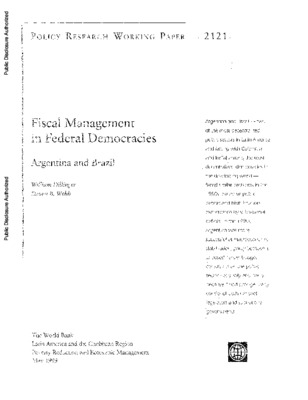 By William Dillinger and Steven B. Webb
Get PDF (4 MB)

In shifting to decentralized public finances, a country's central government faces certain fiscal management problems. First, during and soon after the transition, unless it reduces pending or increases its own tax resources, the central government tends to have higher deficits as it shifts fiscal resources to sub-national governments through transfers, revenue sharing, or delegation of tax bases. Reducing spending is hard, not only because cuts are always hard, but because sub-national governments might not take on expected tasks, leaving the central government with a legal or political obligation to continue spending for certain services. Second, after decentralization, the local or state government faces popular pressure to spend more and tax less, creating the tendency to run deficits. This tendency can be a problem if sub-national governments and their creditors expect or rely on bailouts by the central government. Econometric evidence from 32 large industrial and developing countries indicates that higher sub-national spending and deficits lead to greater national deficits. The authors investigate how, and how successfully, Argentina and Brazil dealt with these problems in the 1990s. In both countries, sub-national governments account for about half of public spending and are vigorous democracies in most (especially the largest) jurisdictions. The return to democracy in the 1980s revived and strengthened long-standing federal practices while weakening macroeconomic performance, resulting in unsustainable fiscal deficits, high inflation, sometimes hyperinflation, and low or negative growth. Occasional stabilization plans failed within a few years. Then Argentina (in 1991) and Brazil (in 1994) introduced successful stabilization plans. National issues were important in preventing and then bringing about macroeconomic stabilization, but so were intergovernmental fiscal relations and the fiscal management of sub-national governments. State deficits and federal transfers were often out of control in the 1980s, contributing to national macroeconomic problems. Stabilization programs in the 1990s needed to establish control, and self-control, over sub-national spending and borrowing.National Governance,Public&Municipal Finance,Banks&Banking Reform,Public Sector Economics&Finance,Municipal Financial Management,Urban Economics,National Governance,Banks&Banking Reform,Public Sector Economics&Finance,Municipal Financial Management