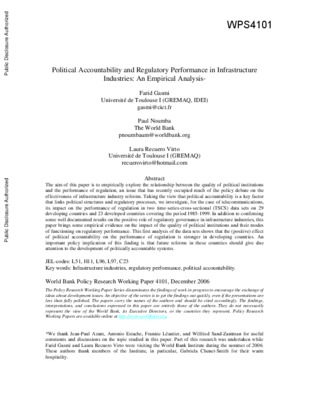 The aim of this paper is to empirically explore the relationship between the quality of political institutions and the performance of regulation, an issue that has recently occupied much of the policy debate on the effectiveness of infrastructure industry reforms. Taking the view that political accountability is a key factor that links political structures and regulatory processes, the authors investigate, for the case of telecommunications, its impact on the performance of regulation in two time-series-cross-sectional data sets on 29 developing countries and 23 industrial countries covering the period 1985-99. In addition to confirming some well documented results on the positive role of regulatory governance in infrastructure industries, the authors provide empirical evidence on the impact of the quality of political institutions and their modes of functioning on regulatory performance. The analysis of the data sets shows that the (positive) effect of political accountability on the performance of regulation is stronger in developing countries. An important policy implication of this finding is that future reforms in these countries should give due attention to the development of politically accountable systems.Infrastructure Regulation,Governance Indicators,National Governance,Statistical&Mathematical Sciences,Econometrics