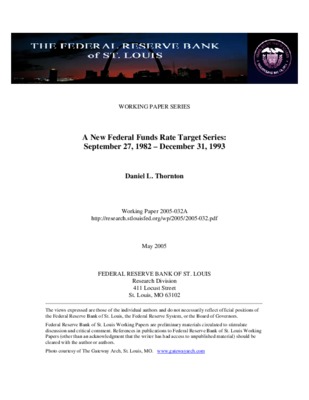 This paper creates a new series of the FOMC*s Target for the federal funds rate for the period September 27, 1982 through December 31, 1993. The creation of this series was motivated by Thornton (2005). Analyzing the verbatim transcripts of the FOMC, Thornton finds that most of the FOMC believed they began targeting the funds rate even before it deemphasized M1*s role in the Fed*s daily operating procedure. The new series was constructed using the verbatim transcripts of FOMC meetings, the FOMC Blue Book, the Report of Open Market Operations and Money Market Conditions, and data that the author obtained from the Desk for the Federal Reserve Bank of New York dealing with open market operations over the period March 1984 through December 1996. The new series compared with another widely used series presented in Thornton and Wheelock (2000). There are some differences in the dating and magnitude of target changes between the two series prior to but not after August 1989.Monetary policy ; Interest rates