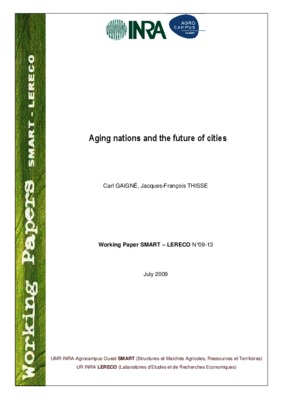 Aging nations and the future of cities

By Carl Gaigné and François Thisse
Get PDF (467 KB)

We investigate whether an aging population may challenge the supremacy of large working-cities. To this end, we develop an economic geography model with two types of individuals (the elderly and workers) and two sectors (consumer services and manufacturing). Individuals are geographically mobile and their agglomeration within a city generates rising urban costs through competition for land. When the elderly are immobile and equally distributed between cities, an aging population works against the agglomeration of production. When the elderly are free to choose their residence, the most likely scenario is such that the city with the lower share of old people follows a U-shaped curve. Increasing commuting costs cut short the first phase in which the employment share decreaseseconomic geography, aging population, spatial mobility, sectoral mobility, commuting costs