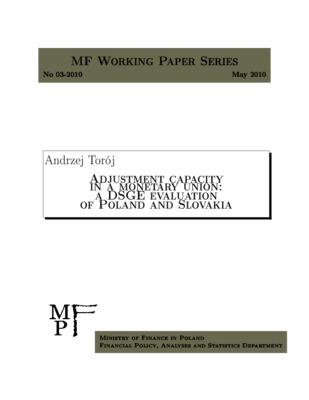 Adjustment capacity in a monetary union: a DSGE evaluation of Poland and Slovakia

Abstract Once a country joins a monetary union, an efficient competitiveness channel is commonly considered to be the main substitute for the abandoned autonomous monetary and exchange rate policy. This paper attempts to make an empirical assessment of how the price competitiveness of domestic producers stabilizes the Polish and Slovak economies in comparison to the real interest rate, that could potentially be procyclical in EMU. To address this issue, we revisit the econometric studies of weighting the Monetary Conditions Index (MCI-ratio) to explore the relative importance of the two channels. We apply the IS-curve approach and -- as opposed to previous MCI-ratio literature -- we build a small open economy DSGE framework to be estimated with classical forward-looking techniques (FIML). We compare the estimates and impulse-response functions for Poland and Slovakia, concluding that the latter country seems to be more capable of handling asymmetric demand shocks under the common monetary policy. At the same time, it remains more vulnerable to asymmetric cost-push shocks. Also, we examine the consequences of a permanent fall in the interest rates in the home economy after the accession to the monetary union. If there was a natural interest rate disparity of 1 percentage point in favour of the catching-up economy and agents expected a 30-year long period of closing this gap, our model would predict a terms of trade appreciation for both countries in question, whereby the required appreciation would be more pronounced for Poland than for Slovakia (9.9% and 2.6% respectively).competitiveness channel, EMU, MCI-ratio, DSGE, forward-looking estimation.