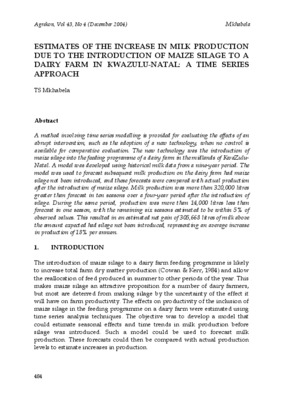 Estimates of the increase in milk production due to the introduction of maize silage to a dairy farm in KwaZulu-Natal: A time series approach

A method involving time series modelling is provided for evaluating the effects of an abrupt intervention, such as the adoption of a new technology, when no control is available for comparative evaluation. The new technology was the introduction of maize silage into the feeding programme of a dairy farm in the midlands of KwaZulu-Natal. A model was developed using historical milk data from a nine-year period. The model was used to forecast subsequent milk production on the dairy farm had maize silage not been introduced, and these forecasts were compared with actual production after the introduction of maize silage. Milk production was more than 320,000 litres greater than forecast in ten seasons over a four-year period after the introduction of silage. During the same period, production was more than 14,000 litres less than forecast in one season, with the remaining six seasons estimated to be within 5% of observed values. This resulted in an estimated net gain of 305,668 litres of milk above the amount expected had silage not been introduced, representing an average increase in production of 18% per annum.Livestock Production/Industries,