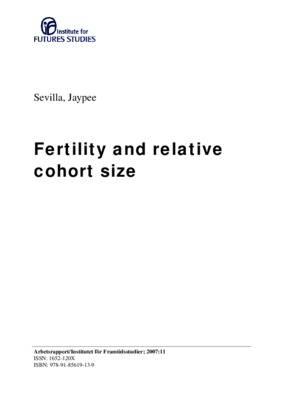 This paper estimates the effect of changes in population age structure on fertility. Few factors are as inseparable from economic and demographic theories of underdevelopment as high fertility rates. Most of the empirical literature on fertility focuses on a small set of traditionally hypothesized determinants: incomes, men’s and women’s education, infant mortality, and the rural share of the population. More recently, Macunovich develops ideas by Easterlin about the potential impact of population age structure on fertility, and provides empirical evidence for its effects. We continue along the lines of Macunovich’s contribution by: (4) Estimating fertility equations in which age structure and the traditional determinants are included simultaneously. This may be interpreted as a test of robustness of one set of variables when controlling for the others. Or it may be interpreted as a test of hypotheses concerning the mechanisms whereby one set of variables affects fertility. (5) Testing for the consistency of cohort size effects across continents and between the developing and developed regions (6) Testing one aspect of the mechanism whereby cohort size is hypothesized to affect fertility, through women’s labor force participation. To accomplish these objectives, we econometrically estimate a static panel equation using aggregate panel data on the relevant variables for 90 developed and developing countries observed every 5 years over the period from 1950 to 1995. We find that: (4) Age structure effects are found in the hypothesized direction. They are remarkably large and very precisely estimated even after controlling for all the major competing determinants of fertility. Thus cohort size has strong effects that are independent of the effects of income, men’s and women’s labor force participation rates, men’s and women’s education, rurality, and infant mortality. (5) Cohort size effects are found in every continent within the developing world, as well as in the developed world. Their magnitudes are remarkably similar across continents and levels of development. Of all the variables included in the regressions, cohort size has the most consistently large and significant effect across all regions. (6) The estimates of cohort size effects survive controlling for women’s economic activity rates. This means that cohort size effects are mediated by more than women’s labor supply (and by more than all other effects controlled for in the specification). We are still in need of an empirically validated theory of why cohort size has a negative effect on fertility.fertility; population; cohort size