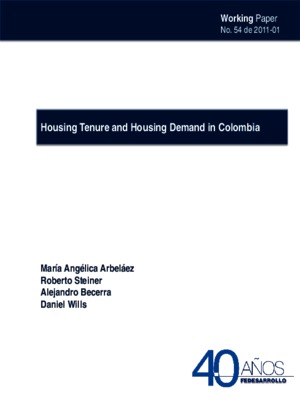 Using the 2003 and 2008 Quality of Life Surveys, we identify the factors that affect housing tenure decisions in Colombia and explore the determinants of the demand for rentals and purchases. Variables affecting the choice between buying and renting include civil status, education, age of the household head, size of the household and whether the household resides in an urban area. Households with higher income are more likely to purchase than to rent and the choice of formal housing is positively associated to wealth. Interestingly, households eligible for social housing subsidies are more likely to purchase than to rent and those working in the informal sector are more likely to purchase informal dwellings. Demand is quite responsive to price changes as well as to changes in the price of rental (its closest substitute). The elasticity to permanent income for both buying and renting is similar to that observed in other developing countries, and is higher for those working in the informal sector. This suggests that subsidies and other interventions aimed at fostering demand should not exclude those holding informal sector jobs. Demand is highly responsive to positive shocks to income, a fact probably associated with credit constraints being binding. Subsidies have a large positive impact on demand. Likewise, access to mortgage credit is an important determinant of demand. Finally, savings have a positive effect on demand in 2008, not in 2003. A plausible explanation is that a policy intervention that began in 2000 -i.e, a tax exemption for households that established savings accounts destined for housing purchases-only had an effect in the upper part of the business cycle. In both cases (i.e. subsidies and credit) the positive effect on demand is entirely explained by demand for social housing. "This paper is part of a cross-country project sponsored by the IADBs Research Network".Housing demand, tenure choices, housing market policies, Colombia.