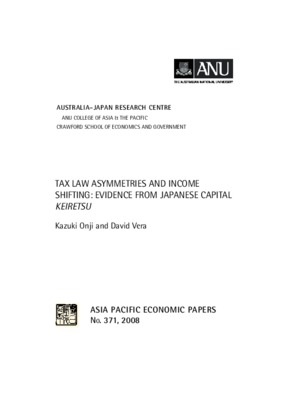 When positive and negative income are treated asymmetrically under a corporate income tax (CIT) without allowance for group taxation, a group of affi liated corporations may engage in tax avoidance by shifting income from profi table to unprofi table subsidiaries for the sole purpose of minimising the sum of tax liabilities of the group members. The aim of this paper is to offer systematic evidence on the behavioural response to a tax penalty that arises from doing business in multiple entities, in order to provide justifi cation for group tax systems such as consolidated fi ling and loss transfer. The setting for our investigation is the Japanese CIT before the introduction of a group tax system. We develop a theoretical model of a corporate group that predicts a difference in profi t reporting behaviour between subsidiaries above and below 100 million yen in paid-in capital due to the progressive feature of the Japanese CIT. We test the implications of the model with a company-level data on subsidiaries based on survey that covers over 1,700 corporate groups headed by large corporations. The sample consists of 33,340 subsidiary-time pairs from 1988, 1990, and 1992. We fi nd evidence consistent with a hypothesis that corporate groups shift income among group members. The fi nding underscores the importance of accounting for the group behaviour in the design of CIT.