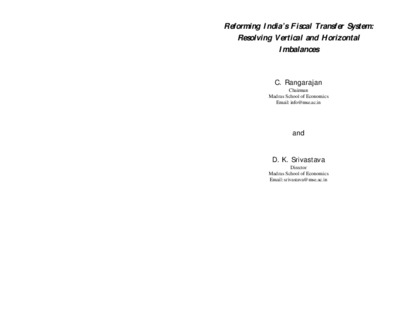 Two central problems in a fiscal transfer systemrelate to resolving vertical and horizontal imbalances. In the context of the setting of the 13th Finance Commission, this paper looks at the methodological background of fiscal transfers followed by recent Finance Commissions in India, particularly the Twelfth Finance Commission (TFC). It is noted that in India, there is long - term stability in the share of states after transfers in the combined revenues of the centre and the states. It is argued that this stability depends on linking the share of states in the transfers, particularly tax devolution with the difference in the buoyancies of central and states taxes. In the context of horizontal imbalance, it is argued that some of the recent Finance Commissions have implicitly followed an axiomatic approach to tax devolution and brought in some normative elements in determining grants. In spite of large difference in fiscal capacities, a high degree of equalization has been achieved. It is shown, for example, that in the case of TFC recommended transfers, nearly 88 percent of needed equalization was achieved while devoting 50 percent of transfers to resolving vertical imbalance. Amethodology is also developed to determine weights of vertical and equalizing components of transfers through devolution. In the case of the Twelfth Finance Commission, the horizontal component of tax devolution is strengthened by a scheme of equalizing health and education grants.fiscal transfer system, vertical imbalance, horizontal imbalance, Twelfth Finance Commission