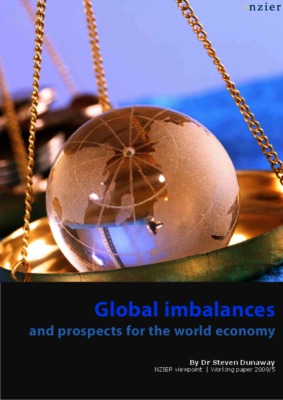 Global imbalances and prospects for the world economy

Most explanations of the current economic and financial crisis focus on its financial causes. Often missing in these explanations is a discussion of how the seeds of the crisis were sown by economic policies in major countries that fostered the growth of global imbalances during the 2000s. Moreover, just as these imbalances created the current crisis, exactly how they are likely to unwindor fail to be resolvedover the period immediately ahead will play a major role in determining the prospects for world economic recovery and the pace of future growth. Largely reflecting economic policies, substantial imbalances in savings and investment emerged among major world economies after 2000, and these imbalances were reflected in growing current account imbalances. Rising U.S. deficits and increasing surpluses in emerging East Asian economies (especially China) and oil-exporting countries in the Middle East developed. The underlying savings and investment imbalances gave rise to a savings glut in developing countries and spawned sizable net capital flows to the advanced countries, with the United States being the primary recipient. This glut of savings contributed to a substantial reduction in world interest rates. At the same time, a significant rise in demand for official reserve assets (largely in the form of U.S. Treasury and Agency securities), especially by East Asian and Middle Eastern economies, crowded out private demand for such high-quality, low-risk assets. Consequently, a scramble by private investors to try to find other higher yielding but low risk assets contributed to the financial excesses that finally culminated in the turmoil that gripped world financial markets in late 2008 and early 2009.global financial crisis, Macroeconomic Policy, economic growth, Global Imbalances