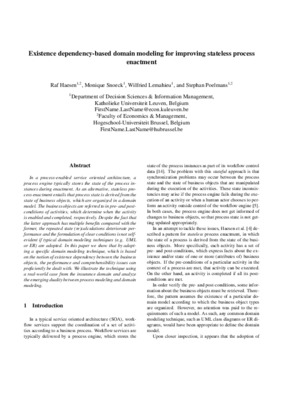 In a process-enabled service oriented architecture, a process engine typically stores the state of the process instances during enactment. As an alternative, stateless process enactment entails that process state is derived from the state of business objects, which are organized in a domain model. The business objects are referred to in pre- and post-conditions of activities, which determine when the activity is enabled and completed, respectively. Despite the fact that the latter approach has multiple benefits compared with the former, the repeated state (re)calculations deteriorate performance and the formulation of clear conditions is not self-evident if typical domain modeling techniques (e.g. UML or ER) are adopted. In this paper we show that by adopting a specific domain modeling technique, which is based on the notion of existence dependency between the business objects, the performance and comprehensibility issues can proficiently be dealt with. We illustrate the technique using a real-world case from the insurance domain and analyze the emerging duality between process modeling and domain modeling.